It is the end of the road for spouses of H-1B workers in the US as they will no longer be able to seek employment, or set up their own business, which for many was something as simple as running a crèche, tutoring, conducting yoga classes or supplying desi home-cooked food to nearby offices.

In a move that would impact nearly a 100,000 spouses of Indian workers, mostly women, the Trump administration plans to revoke + a policy which enables them to obtain an employment authorisation document (EAD).

In addition, the writing on the wall is clear that international entrepreneurs, will in the months to come, no longer be able to apply for parole (in general terms, it means a stay in the US) to nurture their startups for a certain period.

Incidentally, both these Obama-era policies will be revoked in a bid to attain the objectives of ‘Buy American, Hire Amercian’, an executive order signed by US President Trump last April.

Tightening of norms relating to eligibility for an H-1B visa, a popular work visa for Indian IT workers, are also on the anvil.

Light on these ongoing plans was shed in a letter recently issued by L Francis Cissna, director of the US Citizenship and Immigration Services (USCIS) to US Senator Charles Grassley, chairperson of the US Senate Judiciary Committee. Grassley was being updated on the various steps taken and proposed by the immigration agency “to ensure the integrity of the immigration system, specifically of the non-immigrant worker programmes.”

In March, fifteen US Parliamentarians, including those from the technology company-dominant hubs of the East Coast, had sent a letter to the USCIS showing their support to H-4 spouses, given the decade-plus green card backlog and the high cost of living on a single income. Without immigrants, we would not have companies such as Google, Apple, Facebook and Qualcomm and denying spouses the right to work would not attract the best talent to the US. Further, many spouses with work authorisations have set up their own businesses and are employment generators, they had added.

Given such support, including from various industry bodies and business leaders, there was a glimmer of hope that the EAD policy would stay. These hopes now appears dashed.

Cissna’s reply issued in early April reiterates the intention of the Trump administration to “introduce regulatory changes to remove H-4-dependent spouses from the class of aliens eligible for employment authorisations”. It does mention that the public will be given a chance to provide feedback to the new regulation during a notice and comment period. TOI had earlier reported + that a new draft policy could be issued around June and the entire process of bringing in the new rule could take up to the end of 2018 or early 2019.

Rajiv Khanna, managing attorney at Immigration.com says, “In addition to inviting and examining public comments, the US government also has to articulate cogent reasons for changing their mind about the regulation. I expect lawsuits to follow, challenging the government decision to take away the EAD rights that they had given earlier.” Experts feel that a grandfathering period may be introduced to enable workers to retain their jobs till the end of the work authorisation tenure. There is a frenzy on social media, with H-4 spouses expressing their shock and dismay and some calling for a civil liberties lawsuit. 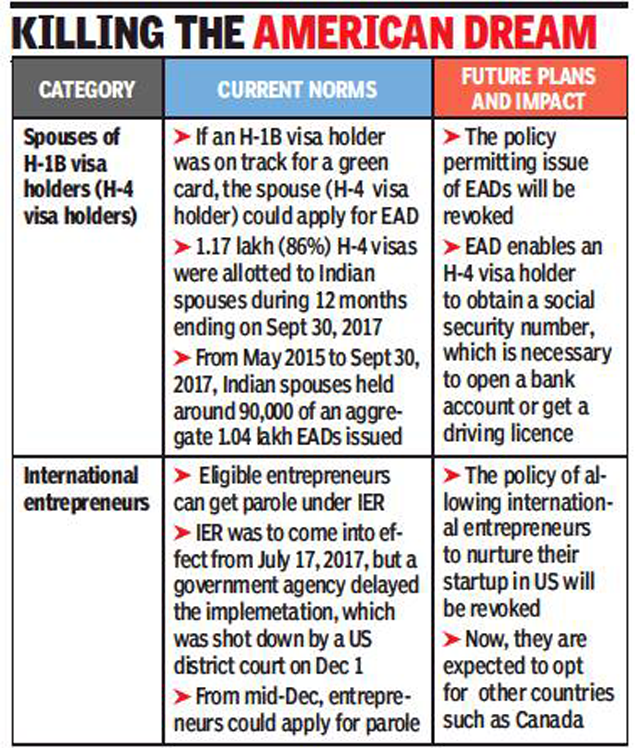 According to Khanna, the changes proposed as regards to H-1B norms are far-reaching. “USCIS intends to change the definition of ‘specialised occupation’. Currently, a specialised occupation is one which requires a specific degree or set of degrees to perform. This definition, even as it stands, aids in denying visas to several meritorious H-1B aspirants.”

To illustrate, in April 2017, the USCIS had passed guidelines that a computer programmer would not automatically be considered as a ‘speciality’ occupation eligible for an H-1B visa. Further tightening may narrow down opportunities for H-1B workers. Cissna’s letter also mentions the need to revise the definition of employment and employer-employee relationship to better protect US workers and wages.